Our house at Vastrap has undergone a transformation over the past two years. In April last year we finished a major renovation of our kitchen, living areas, bedrooms and bathrooms. We replaced all the steel windows with wooden double glazed windows and totally reorganised the way we live. I cannot tell you what a difference it has made! It has taken another year to complete the final touches. One of our biggest areas of indecision was what to do about security. Before we made the changes, every window in the house was covered with steel framed burglar bars that made it look and feel like a jail. I hated them so much that I avoided taking photos of the house, something which I now regret because I can’t show good before and after shots!

Pile of steel bars relegated to the backyard for recycling.

However, we could not get away from the reality that we need some form of security. Living out of town it is not an option to put up beams linked to armed response and one cannot help but feel vulnerable when you are home alone. We searched and searched an avoided the topic until one day we discovered an agent in Bloemfontein for transparent burglar bars, known as ClearBars. Quentin was initially sceptical but Hendrik, the agent for the Free State and Nothern Cape, came to our house to demonstrate how strong they are and convinced us they would do the job. They are made from “polycarbonate and ISO 9001 approved for military VIP protection, aircraft windows, Formula 1 cars, and other applications where safety and security are paramount.  The material has a tensile breaking strength of 3000 kg’s and is virtually indestructible!” Apparently we are the first people in the Free State outside of Bloemfontein to have them installed. 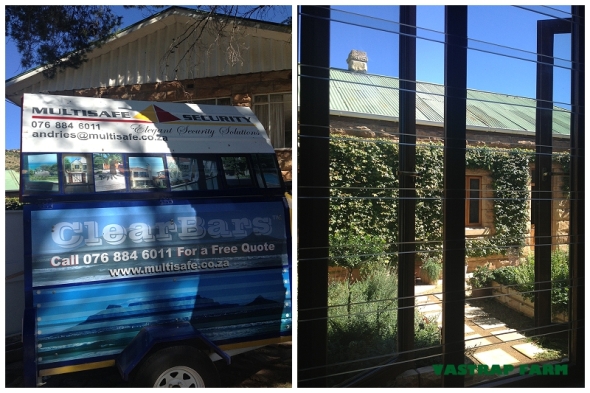 One obstacle was the roller fly screens we installed before the summer. They sit flush against the window and roll up away from sight when not needed. Hendrik had to figure out a way to install the bars behind the fly screens. I cannot praise his service enough. He and his assistant Via spent two solid days at the house removing the fly screens, installing the ClearBars, and cutting and installing new wooden frames onto which they mounted the fly screens. It really looks great and we can feel secure without feeling like we’re in jail. I am particularly happy that the views from my kitchen windows have not been ruined.

View from the kitchen up to the veggie garden. 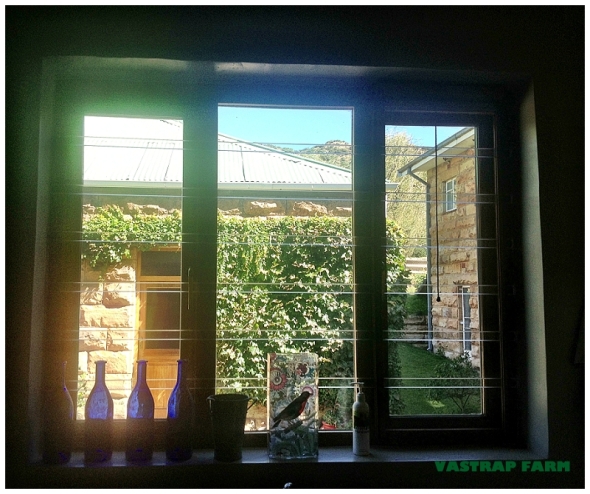 View from kitchen onto courtyard.

View onto the driveway.

One area that remains unresolved is our enclosed veranda at the front of the house. It’s a beautifully warm room on winter’s days when the sun streams in. We did not change the bars here because we plan to eventually replace the steel windows with sliding or folding wooden windows and doors. I think I can live with this view for a while knowing that the rest of the house is sorted!

Remaining bars on the front veranda.

Moon rise yesterday. Photo credit to my love @quentindebruyn
I acknowledge my priviledge. I’m ready to listen with an open and loving heart. I’m willing to do the work required to change. Enough is enough. BLACK LIVES MATTER. #blackouttuesday #standagainstracism Please don’t hashtag blacklivesmatter
My oven is still not working after three weeks of down time. Hopefully it will be serviced soon. In the meantime I was lucky to have some par cooked pizzas from my last batch in the freezer ready to be heated in the Aga. Why don’t I just use the Aga to bake? It is possible, but I can’t control the temp so sometimes it’s super hot and sometimes it’s just meh. Too unpredictable to waste time and energy trying to get too complicated!